Coaching for Self-Actualization: Part I

“The science of psychology has been more successful on the negative than on the positive side … It has been revealed to us much about man’s shortcomings, his illness, his sins, but little about his potentialities, his virtues, his achievable aspirations, or his psychological health. We must find out what psychology might be if it could free itself from the stultifying effects of limited, pessimistic and stingy preoccupations with human nature.” (Motivation and Personality, 1954, p.354)

In an environment where being a psychologist meant either following a Freudian psychoanalytic path or looking for the “machine-like levers” of human beings through a behaviorist path, Abraham Maslow offered a fresh, human-centered perspective. Maslow is one of the founding members of the third force of psychology, known as humanistic psychology, emphasizing the inherent drive towards self-actualization and discovering our potentialities. Many ideas in coaching, such as potential, strength, purpose and creativity have been strongly influenced by Maslow’s work. It is no wonder, then, that he is among the top ten cited psychologists of the 20th century.

Maslow strongly believed that the other schools of thought in psychology were not showing the whole picture of who a human can be and proposed a different approach. As a coach practitioner and a Ph.D. candidate, I claim that Maslow would have been happy to see how professional coaching is aligned with his vision of helping people reach their full potential.

The Hierarchy of Needs  Reimagined.

Maslow is highly associated with his theory on human motivation and the hierarchy of needs, typically represented by a pyramid. Interestingly, Maslow never envisioned his work to be represented by this shape. Rather, that famous pyramid was developed by a different industrial psychologist, and represents the 20th century thinking of hierarchy and power. Diving deeper into Maslow’s work, I am convinced that the pyramid does not reflect his vision. Given the ongoing movement between needs, a ladder or circle better represents his theory. My effort to re-envision his work with concentric circles more clearly illustrates our interdependence on this planet and reminds us that self-actualization is also growth in awareness. The circles also symbolize an ecological thinking rather than egological (ego–centered) thinking.

Also, largely due to the popularity of the pyramid, many understand the hierarchy of needs as a linear, one-step-at-a-time progression. But it is not actually like unlocking the next level in a game or moving onto the next chapter of a book. Human needs are constantly at play, with a dynamic interplay between them. In fact, at any given time we are under the influence of several needs. Lower needs usually get prioritized, unless there is a higher need in play —for example, choosing to go to Starbucks with your coworkers instead of buying that pizza you’re craving, because you choose to prioritize the need for belonging over your hunger.

How does this show up in coaching? First, this requires a coach to help a client understand their current needs. Meet them in the present moment and help the client attune to their physical, emotional and mental needs. Second, the coach needs to explore whether the client needs horizontal development (meeting the needs of that level) or vertical development (exploring needs of a higher level). 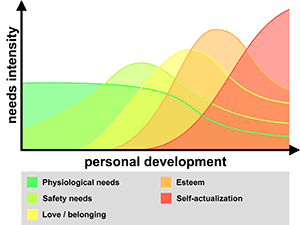 One of the best applications of Maslow’s work in coaching is to understand the two main types of needs for human beings. Deficiency needs (D-needs) create more craving and are more commonly shared  among human beings. A human can live their whole life in the realm of D-needs, chasing safety, belonging and esteem needs unless they tap into the Being needs.

Being needs (B-needs), by contrast, are about our meta-needs of truth, justice and beauty. Maslow calls these B-values. B-needs or B-values are more unique and need to be explored. They are about our guiding light: our purpose, vision, values, strengths and principles that are all indicators of our calling and our desire to reach potential. This view is highly aligned with the field of developmental coaching and I would even claim that development coaching is coaching for self-actualization.

“We try to make a rose into a good rose, rather than seek to change roses into lilies … it necessitates a pleasure in the self-actualization of a person who may be quite different from yourself. It even implies an ultimate respect and acknowledgement of the sacredness and uniqueness of each kind of person.” (Abraham Maslow, 1996, Future Visions, unpublished essays)

As coaches, our role is to help our clients explore who they are, who they are becoming and who they can be. With Maslow’s work, it’s about exploring the farthest reaches of human nature. 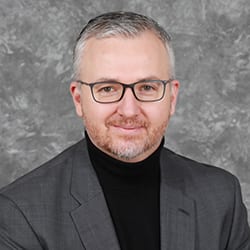 Timothy Tiryaki, PCC, is a Ph.D. candidate and the founder of Maslow Centre for Executive Leadership. Maslow developed North America's first certificate program exclusively focusing on Organizational Culture Coaching. Tim will also be speaking on this topic at ICF Converge 2021. To learn more about the event and to register now, visit icfconverge.com To become one of the first 100 Maslow Certified Culture Coaches in the world, visit www.maslowleadership.com.  You can connect with Tim and follow Maslow Centre for Executive Leadership, on LinkedIn.