As organizational coaching grows in popularity, more and more leaders recognize coaching as a way to achieve business results by focusing more on people, not only as a way to be better at business, but also to be more in alignment with core values and emphasize the human side of the modern workplace.

In January 2017, Shawna, a college registrar, accepted my invitation to “experience coaching.” It was her first experience of formal Leadership Coaching, and she was open to learning more about how it could help her lead her team of 25 individuals representing 14 different nationalities on a college campus in Qatar.

From the first day, we established clear goals for how Shawna wanted to lead her team to engage in personal groundwork, foster greater accountability and pay more attention to business results. Through this process (which also involved departmental reorganization and the creation of an internal leadership team), she shifted from “micromanager” to coach, observed the positive impact on her team, and came to describe her coaching experience as “transformative.”

Perhaps most importantly, coaching created a ripple effect that extended beyond Shawna to impact her team and her organization.

Shawna reported a shift in her experience of coming to work each day. Instead of feeling frustrated and focusing on constraints, Shawna changed her perspective, noting, “I think this realignment has helped me feel much better about coming in to work in the morning because I know the work I’m doing is helping others rather than clearing one more data set.”

We discussed how Shawna had been feeling out of alignment professionally prior to the start of our work together. We started by identifying her core values, and she explained, “I have noticed a big shift from the day that we started, and we did the core values and balance wheel. Previously, I had been focused on quality, data control and effectiveness. These tools helped me identify that my values were teamwork, leadership and integrity and that I was off balance with where I wanted to be…this awareness has really made a big impact in supporting how I enjoy my job, and it’s supported my team as well.”

We also talked about authenticity, and the importance of being in alignment with our core values. Shawna explained, “It’s my regular nature to be real and true and authentic. But I feel in some ways over the last few years, I’ve had to reorganize myself into a framework which is not as real as I would like it to be. So, I think these conversations have helped me recognize the importance of and realign myself with authenticity.”

One new focus for Shawna was developing trust and allowing for vulnerability with her team. “I believe that being more authentic and vulnerable has helped them feel more of a connection to the goals of the department and to each other. It’s helped develop deeper leadership conversations and relationships,” she said.

We also utilized various measurements to track progress with the team. One measurement Shawna used was adapted from Patrick Lencioni’s The Five Dysfunctions of a Team: A Leadership Fable. We observed improvements in each of those measures (trust, conflict, commitment, accountability and results) as a result of the coaching engagement. Shawna was also able to measure quantifiable improvements through an increase in the number of completed projects, which she attributes to the increased accountability and sense of empowerment her direct reports feel because of her shift in leadership approach.

We also introduced a process for asking for and providing feedback to one another. Shawna described this process as an impactful way of improving the team’s communication and trust: “As a result of [the feedback exercises], I can see that there’s an increased sense of trust amongst the team, and that now there’s a group of people not only relying on me for feedback, but working on it together. I can see that my being coached and coaching them is helping them coach each other and their direct reports.”

In addition to an increased number of completed projects and improved business results, Shawna’s team shared powerful stories of how they brought their personal and team learnings home with them. One individual shared a team-building tool with her husband, who in turn brought it to work with his own team.

Shawna and I have been encouraged and energized by the observed “ripple effect” from our work together as a way to grow a strong coaching culture from the ground up in a culturally diverse organization in Qatar. Over time, we look forward to seeing continued growth throughout the organization, and collecting more stories of the contributions of coaching from individuals impacted by this work. 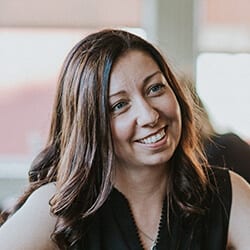 Jenn Wicks, CEC, PCC, is a Certified Executive Coach (Royal Roads University) who supports clients that want to bring more of their authentic selves to their work, home and community. Jenn is a certified facilitator of Appreciative Inquiry and the Authentic Leadership Conversations Series, which helps clients develop greater awareness and inner clarity to help guide themselves through difficult situations along the path to greater authenticity. Connect with Jenn at www.jennwicks.com or on Twitter @jennwickscoach and LinkedIn.